The hydrogen fast track for Germany

A faster ramp-up of the hydrogen economy in Germany is more important than ever in order to drive forward the decarbonisation programme, put the German energy system on a more robust footing, and thus contribute towards a green security of supply. What this needs is a geographical realignment of the infrastructure for energy in gas form: Instead of flowing from the east of Germany to the west and south of the country, the gas – natural gas now, hydrogen in the future – will have to make its way in future from generation locations in the north-west to centres of consumption located mainly in the west and south. That also means that new sources will have to be connected, and gaps in existing pipeline networks will have to be closed. To speed up this vital process, OGE and RWE have developed the national infrastructure project “H2ercules”, which is intended to supply consumers in Germany’s south and west with domestically produced green hydrogen from the north of the country, in addition to imported sources. This will involve connecting up the electrolyser capacities that are currently being planned and developing more besides. RWE wants to create up to 1 GW of additional electrolyser capacity as part of the H2ercules project. For the connection component, OGE is planning to put 1,500 km of pipelines in place. For the most part, this will mean converting pipelines from the existing natural gas network to hydrogen, supplemented by newly constructed facilities. Converting natural gas pipelines is not only the more cost-efficient solution, but it also allows for a faster schedule. The system is expected to be supplemented by the planned hydrogen storages of RWE.

The current plan is to complete the project in three stages between 2026 and 2030, in order to connect industries to the hydrogen supply as soon as possible. The aim of this collaboration across multiple value levels is to resolve the chicken-and-egg problem on a super-sized scale and also smooth the way forward for other projects.

OGE and RWE are both strong companies that aim to combine forces as part of the H2ercules project in order to overcome this Herculean task. While the task for OGE will be to convert the required gas pipelines to hydrogen and construct new pipelines, RWE will expand its electrolyser capacity and import green hydrogen in addition. Gas-fired power stations with a capacity of at least 2 GW will be converted to hydrogen, and new H2 -storages as well as H2-storages repurposed from gas storages on the Dutch border will be connected to the hydrogen supply system.

H2ercules also opens up new opportunities to connect Germany’s future centres of hydrogen consumption to key import routes, first via pipelines from Belgium and the Netherlands, and later via Norway and also from southern and eastern Europe, with the added prospects of import terminals for green molecules in Germany’s north. The project is thus contributing significantly to the creation of a European hydrogen market.

The first additional companies and organisations have already indicated their interest in this project, and it is expected that in the future smaller businesses will benefit in addition to large-scale customers, as the entire industry is guided towards a decarbonised future.

Turning this project into reality requires the appropriate framework conditions to be in place, which the H2ercules partners are discussing with policy-makers. 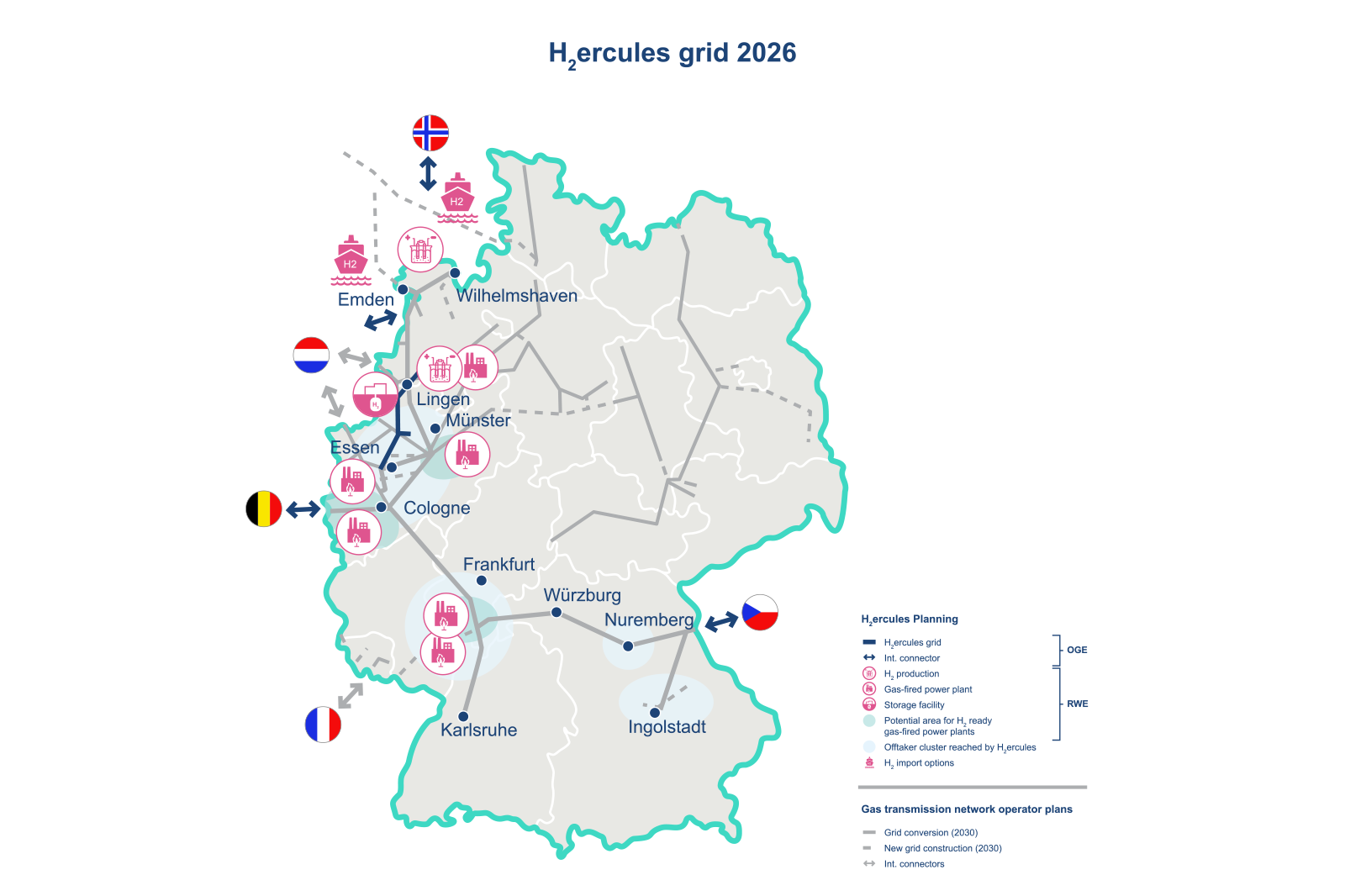 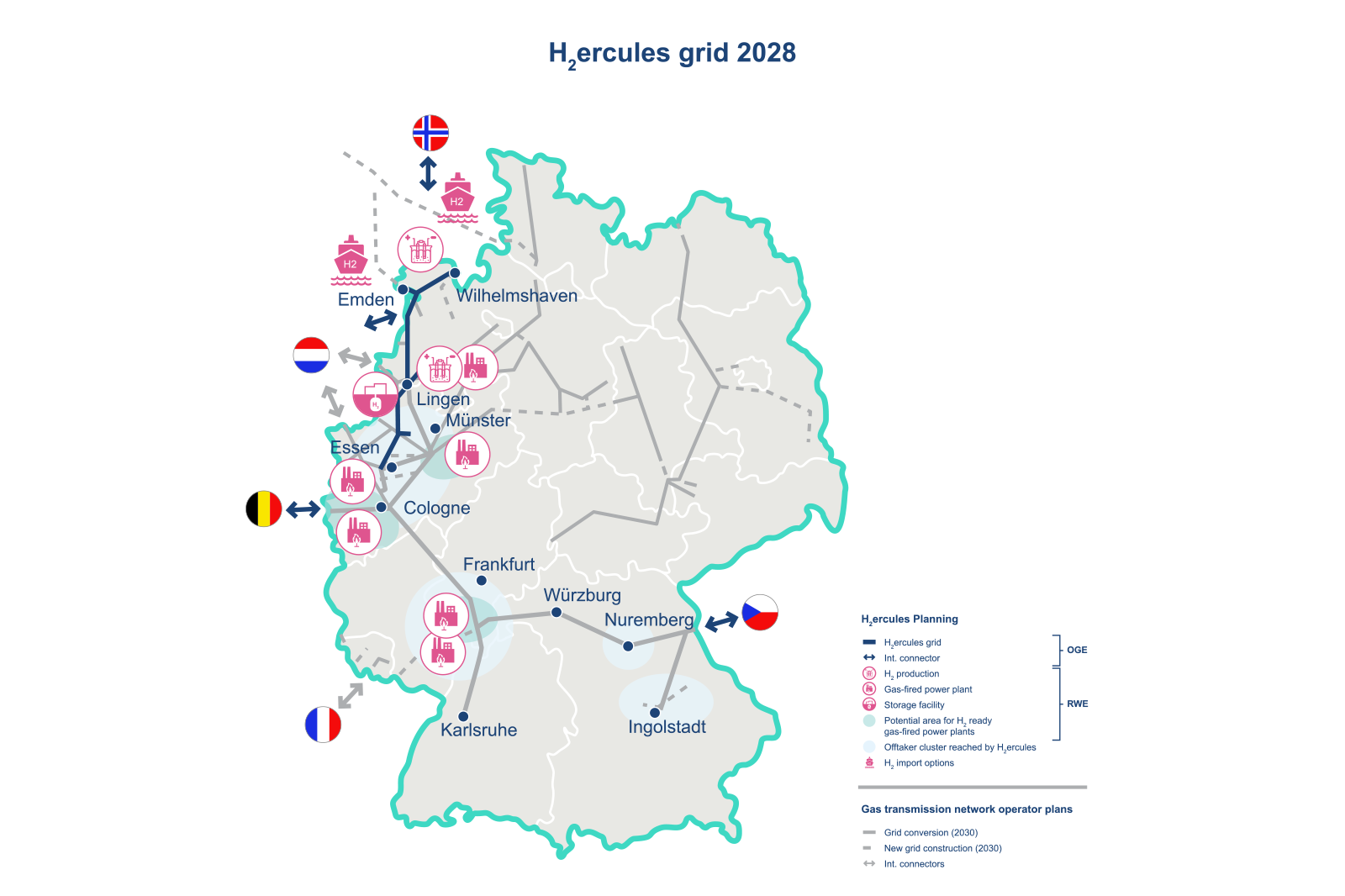 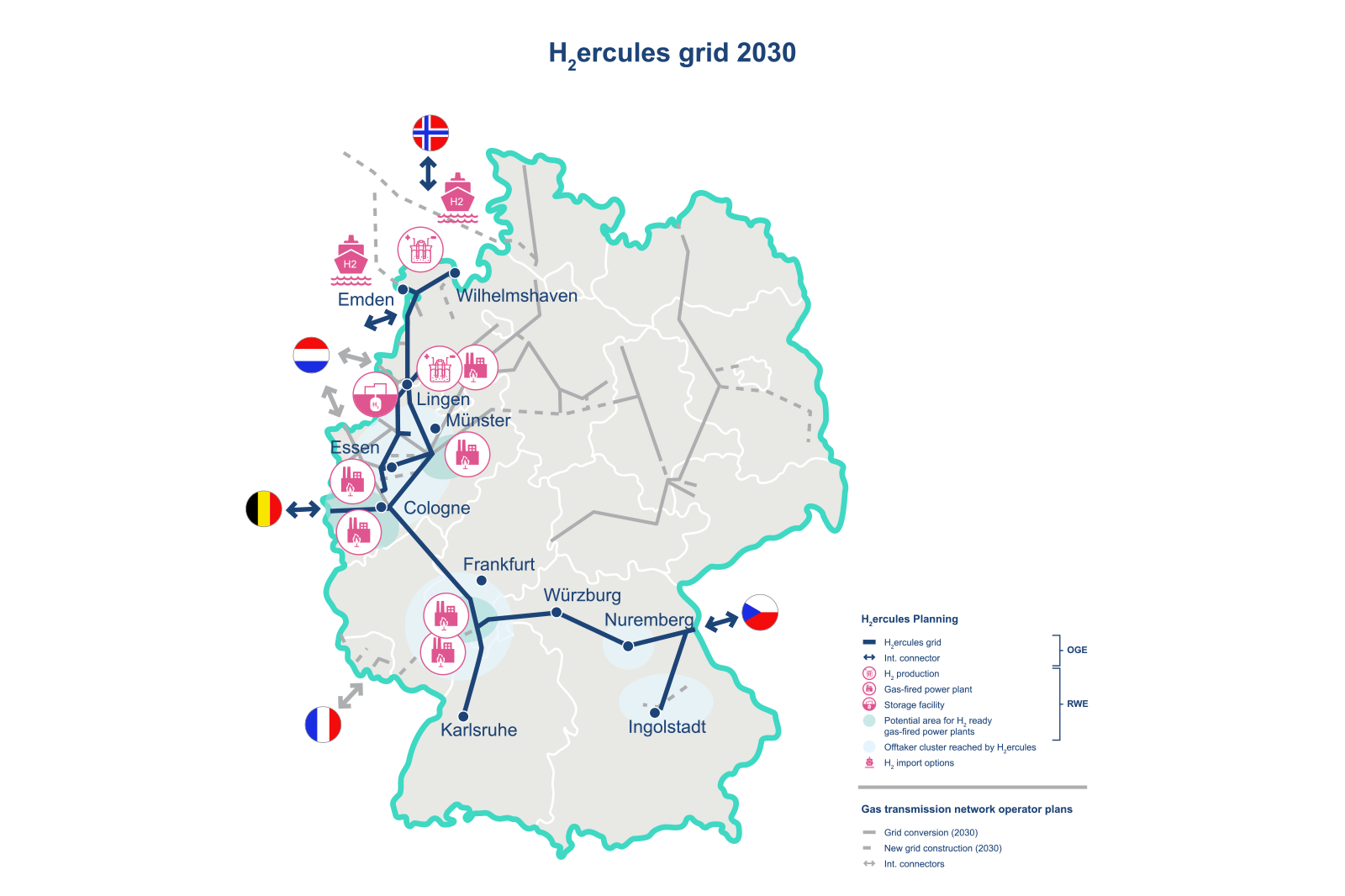 Ramping up the hydrogen economy is not a given. It means building up an entirely new value chain at an industrial scale. That requires a political framework that creates guiding principles for a future hydrogen market, while also offering incentives to invest in the necessary technologies and systems at the various steps of the value chain. The challenge: If a building block is missing, or if the framework for a given building block is set too narrow, there’s the risk that the entire ramp-up can become more expensive as a minimum or may be substantially delayed.